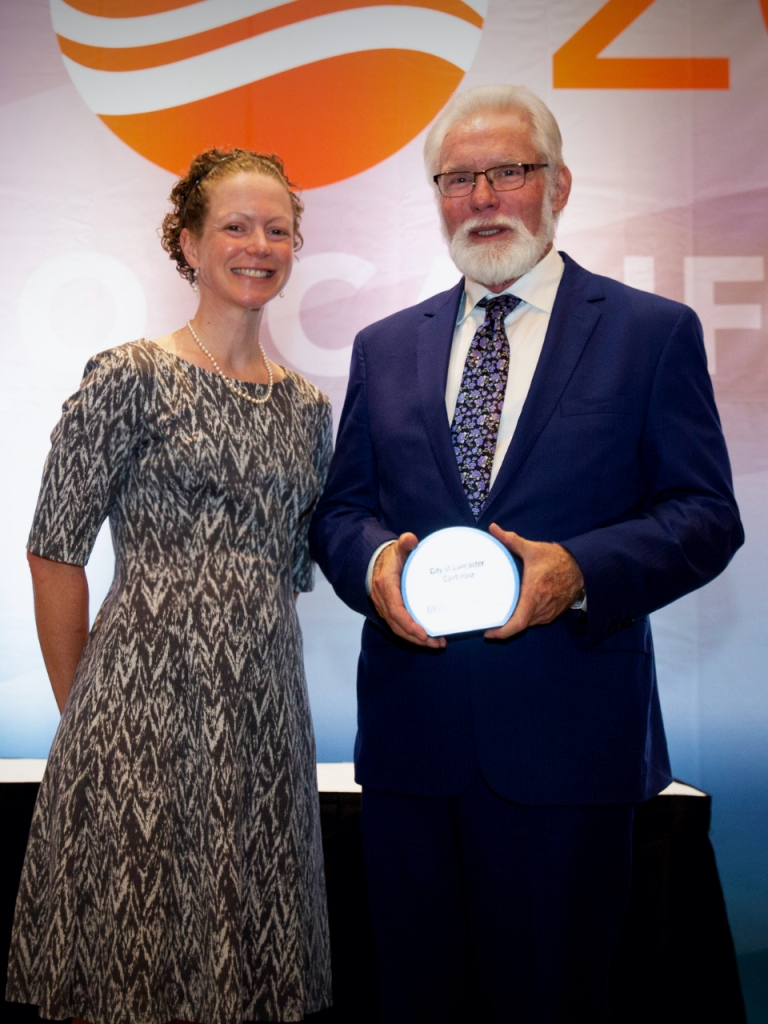 The City of Lancaster, California announced today that it has received a 2019 Green Power Leadership Award from the U.S. Environmental Protection Agency (EPA). The EPA’s annual Green Power Leadership Awards recognize America’s leading green power users for their commitment and contribution to helping advance the development of the nation’s voluntary green power market. The EPA presented Lancaster with the Green Power Community award at the 2019 Renewable Energy Markets Conference in San Diego on September 5, 2019.

Lancaster was the only organization to be awarded with the Green Power Community award this year. With this program, the EPA recognizes Green Power Partners who distinguish themselves through their leadership, overall strategy, and impact on the green power market. The Green Power Community award recognizes communities that distinguish themselves through their green power usage, leadership, citizen engagement, renewable energy strategy, and impact on the green power market. Lancaster is currently using more than 2.5 million kilowatt-hours (kWh) of green power annually, which is enough green power to meet 22 percent of the community’s overall electricity use. By choosing green power, Lancaster is accelerating the transition to a cleaner, healthier, and more sustainable energy future.

“We are proud to receive the prestigious Green Power Community award from the U.S. Environmental Protection Agency,” said Lancaster Mayor R. Rex Parris.  “As Lancaster has become a worldwide leader in sustainability, it’s been our privilege to show other municipalities that alternative energy is an affordable, accessible choice that can help reduce our carbon footprint and create a more sustainable environment for future generations.”

Since being elected in 2008, Mayor R. Rex Parris has positioned the City of Lancaster as a global leader in the alternative energy arena. A compelling advocate of green power, Parris has sought to combat climate change with unconventional ideas and unique partnerships. Mayor Parris’ innovative approach has led Lancaster to become one of the world’s first Zero-Net Energy Cities, which generates more energy than it consumes. In addition, Lancaster was recently designated as the Alternative Energy Research Center of Excellence for the State of California

According to the EPA, Lancaster’s current green power use of more than 2.5 million kWh is equivalent to the annual electricity use of more than 200 average American homes. Green power is electricity that is generated from environmentally-preferable renewable resources, such as wind, solar, geothermal, biogas, eligible biomass, and low-impact hydro. Using green power helps accelerate the development of those sources in the United States and advance the American green power market.

About the City of Lancaster, California
The City of Lancaster is a thriving community of nearly 170,000 in northern Los Angeles County. Clean air, attainable housing, wide open spaces, and a close-knit community make Lancaster an ideal place for businesses and families alike. In addition, Lancaster boasts more than 300 days of sunshine per year, making it the ideal place to pioneer new solar energy technologies. No matter how you look at it, it’s positively clear that Lancaster is the perfect place to live, work and play.

About EPA’s Green Power Partnership
The Green Power Partnership is a voluntary program that helps increase green power use among U.S. organizations to advance the American market for green power and development of those sources as a way to reduce air pollution and other environmental impacts associated with electricity use. The Partnership currently has more than 1,500 Partners voluntarily using more than 60 billion kilowatt-hours of green power annually. Partners include a wide variety of leading organizations such as Fortune 500® companies; small and medium sized businesses; local, state, and federal governments; and colleges and universities. For additional information, please visit http://www.epa.gov/greenpower.